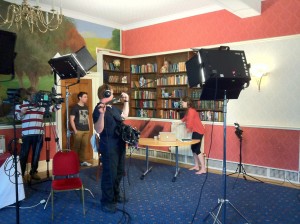 Last week we found ourselves in a hotel just outside Guildford filming scenes featuring students from one of the country’s leading acting schools. This is a regular gig for POV, going back to 2008 when director and actress Julia Carey started teaching the film modules at GSA. Since then we’ve worked with Julia and our partners at the University of Surrey to create feature film production values despite having extremely limited resources. This has clearly paid off for the school as their film modules are extremely well regarded.