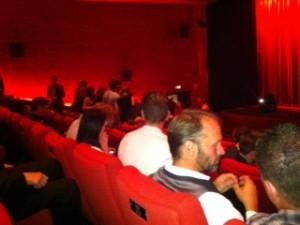 It’s not an invitation you turn down. When Kelly Smith and Mike Mindel, director and producer of new horror feature film ‘Don’t Let Him In’ invited me to BAFTA for the film’s premier I didn’t have to think too hard about whether I wanted to attend.

The film which was the brain child of director Kelly Smith, has been in production for several years. POV got involved in 2009 when after the principle photography had been completed we were asked to do some second unit photography. I’m proud to say some of our footage has even made it into the trailer.

The film was originally called ‘Hollow’ and was rebranded ‘Don’t Let Him In’ when internet marketing guru Mike Mindel got involved. Although it was produced on a low budget it has had significant investment in the final sound mix and grade and judging by the showing at BAFTA it was well worth it. The producers have already sold the rights to distribute the film in several territories and it is getting very good reviews.

We at POV are very happy to be associated with this production and wish Kelly, Mike and the rest of the team the best of luck in this venture and look forward to seeing more films in the future.