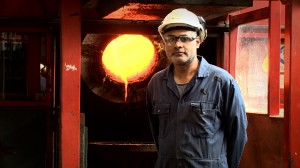 Despite the headline, last week POV weren’t involved in capturing a star studded variety show at one of London’s best know theatres, we were actually filming palladium, along with rhodium, platinum and a list of other precious metals that looked like a who’s who of the periodic table. We found ourselves in Swansea and Acton, West London filming two of the countries oldest refineries that specialise in  extracting precious metals.

The footage is to be used for a corporate video for the Brazillian parent company of the two facilities. It was our job to capture the processes involved and to make the  pictures look visually interesting and exciting. This was done with a two man crew shooting on an EX1 High definition camera filming at 30 frames a second in full 1920 X 1080 resolution so the material could be cut with other footage shot in North and South America.

One of the rooms we filmed in contained literally millions of pounds worth of refined metal which is why we had to undergo a thorough search before leaving the building. However the most exciting parts were the massive furnaces used to melt the material at many hundreds of degrees (see the picture above).