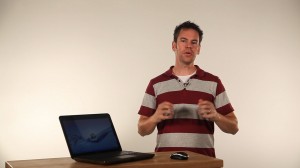 This week we’ve been filming at Teddington Studios with our colleagues at Haymarket. The star was a revolutionary mouse by electronics giant HP. The mouse, which is the first of it’s kind, connects to laptops and desktop computers wirelessly using WI-FI rather than the traditional cable or Bluetooth. This novel approach means, laptops without bluetooth functionality don’t require an additional USB dongle, and laptops with Bluetooth, can have it turned off saving valuable battery life.  The video fronted by Stuff Magazine’s Nic Shaw will be released later this year.