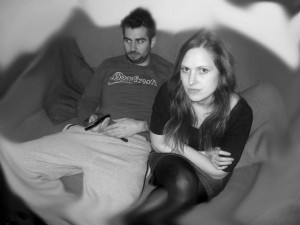 Last weekend POV’s founder Leigh Emmerson teamed up once again with Basingstoke based film collective Pork Chop Pictures. Last time they worked together was on the hugely successful ‘Meat’ short film and spin off series of webisodes where Leigh acted as DOP. This time he was a the helm directing another comedy short entitled ‘Spooked’. The story follows our feckless hero Dermot who discovers his house is haunted. Penned by Pork Chop Pictures’ Mark Brennan, the film features flying remote controls, ghostly Doritos and promises to be an entertaining, if slightly quirky watch. The stars, Ryan Mercier and Hannah Aine Smith as well as the rest of the crew did a sterling job on what turned out to be a very long day’s shoot.

Watch out of the short in the next few months.We’ll keep you posted as to when and where there film will be shown.

Working with Leigh and Persistence of Vision over the years has been a joy and a pleasure. His approach is always incredibly creative and innovative, grounded in solid knowledge of all things technical (which he and his team communicate in a way that’s easy to understand for a non-video/tech person). Highly recommended!