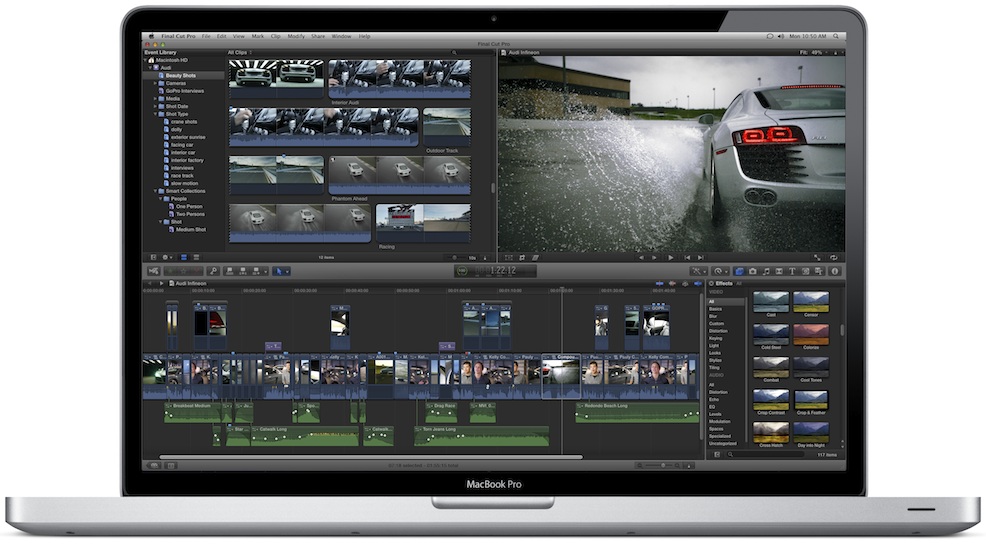 Well the dust has settled a little and we’ve all picked ourselves off the floor after hearing the price Apple is going to be selling their latest iteration of Final Cut Pro for $299 and it’s perhaps time to get into the nuts and bolts of whether it’s any good or not.

Having sat through the 60 minute presentation, I can confidently say there are some exciting innovations in there. Some would say this is long overdue as the last major release was in July 2009, an eternity ago in tech terms! Apple say this is a totally new version that has been written from the ground up which perhaps explains the gap. Now I know that is supposed to be a good thing and indeed for reasons of utilising the horsepower of multiple processors and 64 bit technology it is. However it’s also at the nub of one of my biggest concerns about the software.

You see a lot of us have been editing with FCP for many years now and although things have changed and improved over that time, the basic way the software operates hasn’t. Improvements tended to be in support for new formats, higher resolutions and minor tweaks in the UI.

That meant if you could use the current version, you pretty much knew how to use the new one. That does not appear to be the case this time. The UI is radically different meaning there is definitely going to be a big learning curve to get up to speed with version X.  I really hope there will be a way to have both versions (7 and 10) on your system simultaneously because, firstly you can bet there are going to be bugs when X first comes out and secondly if I’ve got a live project to turn around, I really don’t want to be wasting time trying to work out how to do something I know instinctively how to achieve on the last version.

As far as the new features go, they do look very interesting. I am slightly nervous of features such as automatic audio clean up, colour correction and syncing as my experience of these sorts of features in the past is they work great when being demo’d but when it comes to using them in the real world aren’t always as successful. So lets hope they work and that they can be switched off if required!

The magnetic timeline is heralded as a great step forward, it prevents you from knocking your tracks out of sync. Also if I understand correctly, you now don’t have numbered tracks (V1, V2, A1, A2 etc), the software just creates new ones when you need them, I’ll be interested to see how this works if you’re planning to export for a dub.

Having cut my teeth on Avid as many of us did, I have always found the ‘nanny’
sync protecting functionality in the current version more than a little annoying. It is very frustrating when you are trying to do a trim and you are told this action is not allowed. I suspect this new version may prove to be even more of a pain, we will have to see.

Another concern I have is the amount of nesting allowed on the timeline in this new version. My experience of nesting edits into new clips in previous versions has not been great. Almost without fail I’ve had audio and video tracks decide not to play or drop out or audio mixes come through that bear no resemblance to the original edit. Lets hope this doesn’t happen with version 10. Also there is definitely something to be said for being able to see all your cuts and tracks on one timeline. Sometimes having stuff collapsed can be even more confusing particularly if you didn’t do the original edit.

I really do feel using FCP X will be like learning a new piece of editing software. Apple have always had the arrogance to feel they know best when it comes to these things. The frustrating thing is, with the hindsight of time, they’re normally right. It will be very interesting to see how this version is received. My guess is initially there will be a few negative comments as editors get comfortable with it. Give it a year and none of us will know how we did without it!