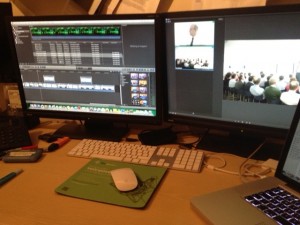 Well after telling everybody to grow up about FCP X, I preceded to try it in anger last September and found myself agreeing with those that had suggested it wasn’t ready for professional use. Whilst I love the fact that it harnesses all of the power of your computer by using all of the cores of your processor, I still found myself getting very frustrated with the basic interface. That coupled with the fact the software had a tendency to just disappear at times meant I estimated it took me somewhere in the region of three times the time it would have taken me to do the same project on FCP 7.

Since then Apple have released a couple of updates to the programme the most recent being the most interesting as it adds the elusive multi-cam functionality that so many editors complained was missing from the original release. Being glutton for punishment I decided to take the plunge on a recent project and give it another go. Part of the reason I thought now was the time was the project was shot with two cameras that needed to be multi cam edited together.

Well despite a few ‘disappearances’ whilst I was importing my footage, the software did work well. I still can’t work out how to easily fade in from black if I have a clip connected to my primary timeline – something none of the forums seem to answer satisfactorily either, but once I has set up my multi clip, it worked like a dream. In fact the process of setting up the multi-clip was amazing as well.

Last year I watched a Youtube clip that likened the multi cam functionality of FCP X to the ‘cut and paste’ functionality of IOS saying Apple didn’t release it right away but when they did, they got it right. Well I have to say I think they may have had a point. Apple have totally re-thought how multi cam works and frankly made it better than any other software I’ve used. Better than Avid and FCP 7. First of all, to create your clip all you need to do is record with some sort of audio on all your cameras then once they’re imported, just shift select and create a ‘New Multicam Clip’. FCP X uses Pleuralise type technology to sync your clips without the need for timecode and it did it really quickly with the hour long presentation I was working on. Not only that but I was shooting on a Z1 and I had a tape change in the middle of the presentation which FCP X dealt with perfectly, giving me just the one clip to edit with.

Secondly if you double click on your multicam clip you open the multi cam editor which allows you to see all your cameras in a timeline, rather like you would if you were using the old ‘stacking’ technique. This means you can adjust sync and colour correct a single camera all the way through. It also allows you to tweak the audio.

It’s also worth noting you’re not now limited to using clips that are all the same format in a multi cam clip intact you can even use still which the software apparently will sync up using the time stamps.

The bottom line is I didn’t need to waste time doing a manual sync. I could just play my clip and live edit on the timeline. Had I not had to add slides, I could have probably done the edit in near real time. I can safely say this time FCP X was quicker than FCP 7 and I would definitely consider using it again for this sort of project. I still see it as another tool in my armoury rather than the only tool, but it’s getting better and better and I look forward to what else they are going to add to it.