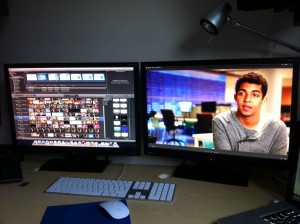 Well after telling everyone they should just calm down about Apple’s latest version of their video editing software I thought it was time to put my money where my mouth was and put it through it’s paces on a real live project to see just how good or bad it is in the real world.

I didn’t get off to a great start as when I tried to download the software from Apple’s Mac Appstore. It refused to let me buy it due to my graphics card was not up to the job. So £200 later, with an ATI Radeon HD 5770 installed in my Mac Pro (the easiest upgrade I’ve ever done!), I was ready to download. Suddenly this bargain £200 software has doubled in price but in fairness if all Apple cared about was my cash they would have waited until I’d paid before telling me the deficiencies in my hardware.

Anyway on to the software. Firstly I totally understand why a re-write was needed, FCP 7 didn’t take full advantage of the hardware in modern machines and you can see straight away that the new FCP is very responsive. The first thing you notice is program forces your to scrub through your content on the timeline or your rushes when you move your mouse over them. Something that’s very impressive but actually quite annoying. You can turn the audio scrubbing off but I’d personally like to be able to turn the whole thing off and just scrub when I hold down the mouse button.

One of the biggest changes is how the new program deals with your source material. In FCP 7, Avid and pretty much every other editing program you sort your clips into bins. With FCP X, you tag them with keywords and ‘smart lists’ are created from your tags and they act as bins. It takes a while to get your head around but actually it might well be an improvement as it means clips can reside in many different smart lists at the same time.

Interestingly the main criticism of FCP X is that it’s a toy and not suitable for professional use. In some respects I’d agree, but when it comes to media management I think it’s probably more appropriate for professional projects with lots of media such as documentaries and feature films. The new system is all geared around you being able to find the clip you want really quickly. It will even categorise your shots into Wide, Medium and close automatically if you ask it.

Sequences are now projects, so if you are working on a number of timelines on a job, essentially you seem to have to create a new project for each. This seems more than a little clunky and I had real difficulty organising my sequences into folders as the list of sequences didn’t scroll if you were dragging to somewhere out of the visible area of your list. Something to fix asap Apple!

FCP 7’s left hand player window has been replaced by a film strip type view which you scrub through and can set your in point. The video is displayed on the single video window along with the timeline when you’re on it. This actually didn’t take too long to get used to and if I’m honest I did find it quite useful when trying to find shots within a larger clip.

My biggest gripe with the software so far is the trimming. I, and many other editors have been used to precision triming cuts and despite the ‘close precision editor’ being called a ‘precision editor’, it is a blunt instrument. As far as I can tell you still have to drag clips to adjust an edit and that is very hit and miss. To accurately control at frame level, you need to zoom right in where as with the FCP 7 trimmer, it’s just a case of clicking some buttons.

Also when working with audio, a trick I like to use in FCP 7 to smooth out a difficult audio cut is to to create a one frame audio mix on it. This seems to be impossible to do on FCP X. Apart from the fact it’s very difficult to do things to the audio without effecting the video, if you do add an audio mix there seems to be a minimum duration of 3 frames.

One other major change is the way the software deals with tracks. Rather than having numbered tracks, there is a primary story line where your main content goes and then you ‘connect to the main storyline’ your B-Roll which sits on top and is anchored to the main story line. This did cause some frustration however I think with a bit more time I could get used to it and what it does mean is your B-Roll never goes out of sync.

Adding captions seems to be a bit of an ordeal at the moment. Having not forked out for the new version of Motion yet I was stuck with the built in options. Now don’t get me wrong, there a lot of very impressive templates built into the software but if all you want to do is add a basic name Aston or a placeholder graphic it’s not as easy as it should be.

There is a custom caption option but cutting and pasting this at the moment doesn’t seem to work properly meaning you have to start from scratch each time. For placeholders there is a special type of clip which assumes you want a mockup of people in it and so you have to change it each time to have a plain background. The text on this seems a bit flakey too at the moment. I wanted my text vertically centred in the screen, which I seemed to be able to do but then when I came back to it, it had moved back to the default position at the bottom.

Overall the software seemed relatively stable for a V1. I had a couple of crashes where the software just disappeared and took me back to the desk top but when I relaunched I hadn’t lost much. Playback most of the time was fine. Occasionally it would be glitchy and sometimes I would hear audio clicks that weren’t there and sound would lose sync. A quit and relaunch seemed to fix this.

I still haven’t graded or completed a final audio mix on the project so that will be the next test for the software and I’m hoping that is where it will really shine. After this project my feeling at the moment is that I will go back to FCP 7 until the next update where I’m hopeful the trimming will have been addressed.

Hopefully Apple will listen and add these sorts of features as I think this software could be good. To get from zero to this in one version is brilliant but now it needs a bit of refinement to be a serious tool.