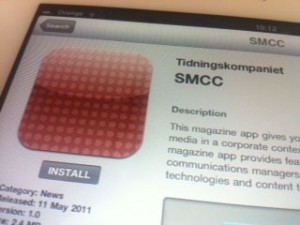 Once again POV rose to the challenge of creating an engaging up to the minute app for Apple’s iPad, this time at Communicate Magazine’s SMCC Conference in London. Reprising their feat in Amsterdam, the same team managed to produce an application in lightening time, this time featuring content and discussion from the London event.

In four hours the app was up and downloadable from Apple’s Appstore and featured video and text input from the 100 plus delegates covering key social media issues. David Noble, who was heading up the team said:

“We’ve proven yet again how efficient, simple and cost effective it is to create 21st century custom publishing tools that harness modern digital technology to stimulate interaction and engagement between producers and consumers of information in ways that were just not possible earlier.

The App from the Communicate Magazine SMCC conference helps show the future of custom publishing and corporate communication.”